This article came from Bitcoinist.com

The Twitterati stated earlier Monday that BTC/USD closed above a “multi-year bullish triangle” by almost $2,000. The pair’s giant move above the “continuation pattern” increased its likelihood of testing short-term breakout targets, beginning with $15,000. Mr. Mancini said Bitcoin could extend its upside towards $24,000, as well.

“[The cryptocurrency] may be the new kid on the block but the same old classic patterns that apply to all financial assets still apply,” he tweeted. “[The] trend is up with 15k next target.”

Bitcoin is likely to continue in the direction of its previous trend after breaking above the Triangle pattern. Source: TradingView.com

The statement appeared after Bitcoin secured its $12,000-price target during the early Asian Monday session. The cryptocurrency’s jump took place despite growing worries about a price correction, showing that traders chose to favor its long-term fundamental outlook over its technically overbought conditions.

Bitcoin’s upside move also appeared as Morgan Stanley warned about a “burst of inflation” in the US. The Wall Street bank’s equity strategist, Mike Wilson noted the Federal Reserve’s aggressive fiscal and monetary response to the COVID crisis pushed its M2–a benchmark measure of US money supply–to its record high.

“While we are likely to experience big imbalances in the real economy for several more quarters, if not years, the most powerful leading indicator for inflation has already shown its hand — money supply, or M2,” he told FT.

Mr. Wilson added that fears of inflation would end up sending investors into risk-oriented assets, such as equities.

The concerns are already reflecting in the US Treasuries. Interest offered on buying the benchmark 10-year US bond has dipped to near zero. Adjusted per inflation, the real yields lately crashed to minus 1 percent.

Gold, which is considered the second-best to bonds, has surged to its all-time high, meanwhile. The precious metal went above $2,000 an ounce for the first time – logging a 36 percent rise on a year-to-date timeframe.

So it seems, Bitcoin, whose economical properties resembles that of gold, is playing catch-up with the safe-haven asset. Its scarcity against the unlimited US dollar supply has earned it the tag of “digital gold.” 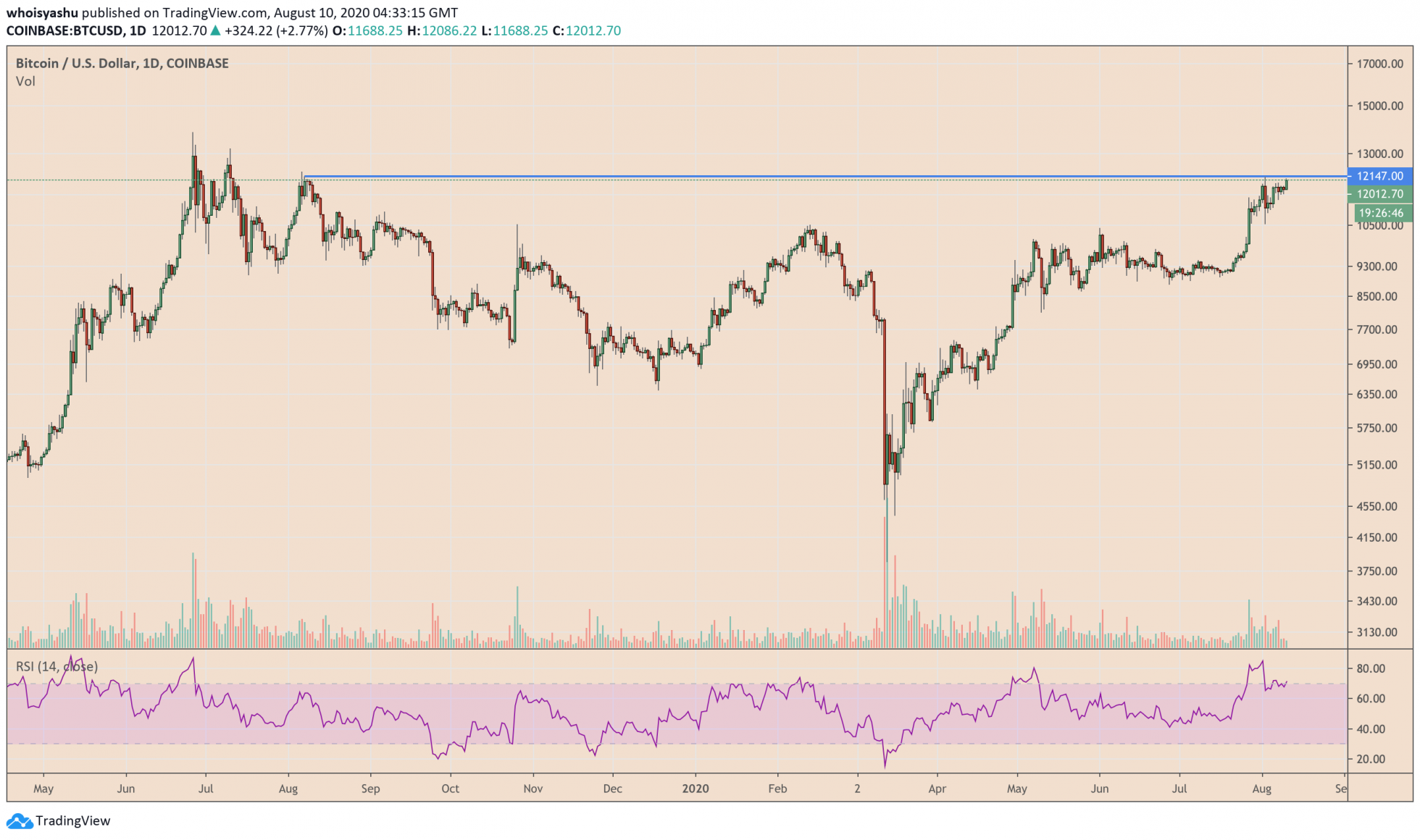 Bitcoin hits $12,000 in the early hours of the Monday session. Source: TradingView.com

Its break above a technical Triangle range certainly points towards an increase in adoption. Ronnie Moas, the founder of Standpoint Research, noted that the cryptocurrency is attracting large buy orders, adding:

“11 years into the #bitcointimeline, we’ve reached an Inflection point where the likelihood of large (institutional). BTC orders are coming in to Buy are more likely than large orders coming in to Sell. Remember it took ~10 years for paper checks and credit cards to go mainstream.”

This article came from Bitcoinist.com